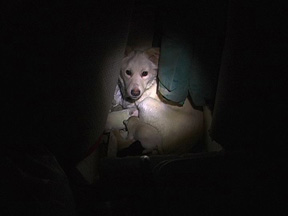 In Tokyo, at the mouth of the Tama River, a man lives on a ship while repairing motorboats. With dogs at his side, he occasionally turns and talks to the camera. The camera stares back at him fixedly, as the director commits himself in the acts of watching and listening.